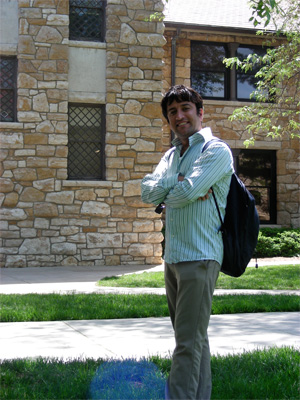 How does a successful Kurdish journalist and businessman wind up across the world in the middle of Kansas?

Raised in Erbil, the bustling metropolis and capital of Kurdistan, Goran Sabah began his journalism career in 2000. He attended Salahaddin University, reporting for the student newspaper. Goran’s interest in journalism grew as he watched other novice journalists write propaganda that caused damage to members of their community.

As he studied and practiced journalism, Goran noticed the bias in the Kurdish media. He found the lack of an ethical approach to reporting disconcerting. He would criticize his colleagues for writing biased articles. “I was writing very cautiously not to be biased toward the political parties,” Goran says.

Goran reported news for a Kurdish national media newspaper after college. His next career move took him to a Kurdish satellite television where he worked for two years as an English news editor. In this role, Goran translated and oversaw translation between English and Kurdish media. He worked briefly in 2007 for a political magazine. He seized an opportunity at Dortmund Technology University, in Germany, to study a four month course on how a news agency works.

Upon his return, Goran partnered with three other students and co-founded the Kurdish News Agency. That agency now has 250 employees. Goran is concerned with the decline of the American newspaper industry — in Kurdistan, circulation is currently rising.

He believes the difference lies in how American media approaches news delivery, especially in the use of multimedia. An American reporter, Goran says, “should be a reporter, editor, videographer, cameraman, everything — and edit the images and launch it all by himself. In Kurdistan a reporter is only a reporter, a photographer is a photographer and an editor is an editor. These multimedia concepts aren’t really noticed and practiced. I don’t know any media outfit that is using a multimedia scope.”

Journalists and authorities are always at odds, and it can be a very challenging for a reporter in Kurdistan. Journalists who engage in partisan propaganda run greater risks of reprisals. Goran says, “I always tell my colleagues, ‘Write whatever comes to your mind — but if you know you will get killed from it or arrested, stop writing.’”

The death of a fellow journalist at the hands of political partisans in 2010 deeply influenced Goran’s decision to pursue a masters degree in journalism. Goran says, “I am not defending those who killed him. It was a heinous, inhumane act and I was sad for the guy. But I also criticize him. He should not have written that way.”

Goran received a Fulbright scholarship and completed his masters degree in journalism at the University of Kansas in just one year. The masters program has been demanding but he believes the degree will open doors to professional development when he returns. While completing his masters degree, Goran also wrote and published a book, “Iraqi Fulbrighter: Removing Hatred between American and Middle Eastern Peoples.”

Standard coursework at KU requires study of the First Amendment. Goran learned a great deal about the importance of law and media. He says, “For example, if a journalist writes about a public official here, the burden of proof is on the public official to prove that it is not true. In Kurdistan it is the exact opposite.”

Goran relishes the level of interaction and care that the professors at KU provide. “The teaching process here in the United States is based on critical thinking, and freedom of opinion inside the class. If you tell a teacher in Kurdistan, ‘I disagree with you,’ then it’s a real problem,” Goran says.

He feels that training for journalists in ethics, law and relationships with the military will be pivotal to the professional success of journalists in his country. Goran says, “I did not expect that ethics would get that much attention here in the United States.”

Goran hopes to share his experiences and the education he has received at KU with young Kurdish journalists, training them how to write ethically. He sees education and training as an avenue for building a better Kurdish media.